As the trade friction between China and the United States continues to heat up, Ford Motorâ€™s â€œChina Growth Planâ€ may face new challenges.

Recently, trade frictions between China and the United States have attracted considerable attention from the industry. Although the State Councilâ€™s decision to impose a tariff of 25% on 14 categories of 106 items originating in the United States has not yet officially landed, the decision has been triggered in the Chinese auto industry. Large-scale repercussions. In contrast to the "zero impact" situation when the "double-vehicle opposition" in 2011, once the above decision is reached, Ford Motor Co. will be subject to greater exposure due to the official entry of the Lincoln brand into the Chinese auto market and the long-term reliance on imports of parts of domestic auto parts. influences.

In response, Ford (China) relevant person in charge said in an interview with the "China Business" reporter, Ford Motor Co., Ltd. has not prepared relevant response plans for China-US trade friction. "We hope that the two governments will work together to solve the problem between the two major economies. problem."

Cui Dongshu, secretary-general of the National Passenger Vehicle Market Information Association, believes that with the continued strength of the Chinese government, the balance of interests between big powers may become the norm. Although the ultimate outcome will be a peaceful solution, how to respond to the development of its own The new changes in international politics will become new topics that Ford, General Motors and other multinational auto companies will face.

According to the â€œAnnouncement Concerning Adding Tariffs on Certain Imported Commodities Originating in the United Statesâ€ promulgated by the Ministry of Commerce, the U.S. government announced on April 3, 2018 that it will impose a 25% tariff on imported products originating in China. It involves about 50 billion U.S. dollars in exports to the United States. Since the United Statesâ€™ 301 investigation was a unilateral finding, and this measure is a clear violation of the relevant rules of the World Trade Organization and seriously violates Chinaâ€™s legitimate rights and interests under the rules of the World Trade Organization, threatening the economic interests and safety of the Chinese side, the Chinese government will The Peopleâ€™s Republic of Chinaâ€™s Foreign Trade Law and other laws and regulations and the basic principles of international law, safeguarding their legitimate rights and interests, will impose tariff levies on imports of soybeans and other agricultural products, automobiles, chemicals, and aircraft imported from the United States. The tax rate is 25 %, involving about US$50 billion in Chinaâ€™s imports from the United States in 2017.

According to the â€œList of Tariff Products on the United States and Canadaâ€ published by the Ministry of Commerce, the US produces a conventional power car with a displacement of more than 1.5L, SUVs, MPVs with less than 9 seats, and plug-in cars with a displacement of more than 1.0L, SUVs, 9 Submarine MPVs, pure electric vehicles, and unlisted motor vehicle transmissions and parts are all subject to additional tariffs. Industry analysts believe that due to the importation of domestic auto parts and components, the Ministry of Commerceâ€™s announced tariff increase measures will have a greater impact on companies such as Lincoln and Tesla. , Jeep and other brands of domestic car production costs rose. Regarding the increase of tariffs, Dong Yang, executive vice chairman of China Automotive Industry Association, also bluntly stated that Sino-U.S. auto cooperation is a mutually beneficial cooperation and is absolutely beneficial to the U.S. side. If there is no development in the Chinese market, U.S. GM, Ford, and Chrysler will be the three largest The auto company will become a second-rate company.

According to the current development of the three major automobile multinationals in the Chinese market, Ford Motor should be the most directly affected American car company. According to Peter Fleet, Chairman and Chief Executive Officer of Ford (China) Board, whether in the current traditional fuel vehicle market competition or in the future layout of new energy automobile market, the Lincoln brand will support Ford Motor Co. The main force of sales in the high-end car market. At present, all models under the Lincoln brand are imported models, and are most directly affected by the tariffs of imported cars, although Fawlett has revealed that Lincoln Motors will carry out the first domestic-related plans for cars in 2019, but with Compared with the decision to charge import cars imported from the United States, the Lincoln brand's domestic plan is obviously "not far from hydrolyzing nearly thirsty." As of February 2018, the total number of imported Ford cars in China was 2,176 units, a year-on-year decrease of 31%. The total sales volume of the Lincoln brand for the first two months was 7,659 units, an increase of 1% year-on-year. As the sales volume of imported models has fallen sharply and the competition of second-tier luxury brands has become increasingly fierce, the Ministry of Financeâ€™s decision to raise the tariffs on imported US-made cars is undoubtedly a big challenge to Fordâ€™s imported models.

â€œFrom the end of 2011 to the end of 2013, the Chinese government had implemented 'double reversal' (imposition of anti-dumping duties and countervailing duties) on U.S. imported cars. The Ministry of Financeâ€™s decision to impose tariffs on imported U.S.-made cars will once Even the import car business of all multinational car companies in the United States has an important influence. Although this trade friction is very likely to be resolved, the challenges behind the change in the international political situation cannot be ignored by transnational car companies,â€ Cui Dongshu said in an interview.

For now, 2018 will be a very important year for Ford Motor Company. Sino-US trade friction will not only affect the sales of Ford imported cars in China, but also closely related to Fordâ€™s â€œChina Growth Planâ€.

According to Friedley, Ford Motor will carry out business redeployment in 2018, and various measures will ensure the smooth progress of the â€œChina 2025 Planâ€ and bring satisfactory returns to the shareholders of Ford Motor Company. However, from the current car sales data, Ford's "China Growth Plan" progress does not seem ideal.

According to Fordâ€™s official sales data, Ford sold 123,000 units in China in the first two months of 2018, down 23% year-on-year, excluding the 1% increase in Lincoln brand models, Changâ€™an Ford, Jiangling Motors, and Ford. The sales of imported cars have all declined significantly. Among them, the cumulative sales of Changan Ford 78,242, down 28% year-on-year, Jiangling Motors sold a total of 35,396 vehicles, down 14% year-on-year.

Judging from the performance, Fordâ€™s sales in 2017 have already experienced a significant decline, affecting Fordâ€™s profits in China. In the fourth quarter of 2017, Ford Motor's pretax profit in the Asia-Pacific market fell by 98% to US$5 million, a sharp contrast to the US$284 million in the same period of 2016, in order to demonstrate the impact of Changan Ford's declining sales. Changan Automobile (000625.SZ) also stated in its 2017 performance report: â€œIn 2017, the company achieved a net profit attributable to shareholders of listed companies of 7.139 billion yuan, a year-on-year decrease of 30.61%, mainly due to the return on investment from joint venture companies. Due to the drop in profits.â€ Under the circumstances that the joint venture brand's profitability has declined, and the â€œ2025 Planâ€ has just begun to take a large amount of investment, the challenge brought to Ford Motor Co. in 2018 is not only from product sales, but also from economic benefits. In this regard, the relevant analysts of the League of Nations Securities also pointed out in its related research report: â€œIn response to the domestic consumption upgrade trend, Changâ€™an Ford began a new round of product launch cycles in 18 years, accompanied by the localization of Lincoln and the release of new models, Changâ€™an Ford profits. It will bottom out in 2018."

According to the plan, Ford Motor will achieve a goal of 50% increase in revenue in China in 2017 than in 2017. Based on process optimization, it will introduce more smartly connected models and establish closer ties with Chinese consumers. And a more streamlined operating structure. Whether it is new retail cooperation with Alibaba or joint construction with Zotye Automobile, Ford Motors needs to invest a lot of money in China. Under this background, how to protect investment while continuing to increase investment? The interests of shareholders are particularly important. With obvious sales declines in both Changan Ford and Jiangling Motors, if the sales volume of the Lincoln Motors, which is in the period of climbing sales, fluctuates due to the adjustment of import vehicle tariffs, the pressure on Fordâ€™s development in the Chinese market can be imagined. In this regard, the well-known car industry commentator Ling Ran said in an interview with reporters, how to make up for the price gap caused by the increase in tariffs in the minds of consumers through product strength and service capabilities, will be Ford Motor's response to China-US trade friction and maintain profitability The key lies.

In fact, the impact of China-US trade frictions on Ford Motor Co. does not come from one side. According to previous reports, because the demand for small cars like the Fox market in the US market is lower, Fox is relatively more cost-effective to make Fox in China. The Ford U.S. Michigan factory will no longer be responsible for the production of Fox models since 2018, and the future US market The new Fox (fourth generation model) sold will be imported from China. Although Foxâ€™s import from China could save Ford Motorâ€™s annual production cost of US$1 billion, it is still unclear, but in an interview with reporters, Friedley personally stated: â€œFordâ€™s business in North America has been very successful, while Fordâ€™s products produced in China have been very successful. Quality is full of confidence. Ford North America also announced that it will import the Fox models made in China." From this point of view, once the decision to impose auto tariffs between China and the United States has been settled, Ford's import and export business in China will face severe consequences. challenge.

Spindle assembly is a crucial part for your lawn mower cutting deck that work together with the pulleys and belts to perform clean and even mowing.

Qualified Spindle Assembly accessories are very important for the whole equipment; these are the key points and determined the quality of Spindle assembly.

Which kind of spindle assembly does QFQP produce?

We produce various kinds of spindle assembly, especial for riding mower (with aluminum/ductile iron housings). All parts assembled by our experienced workers.

Where are the products sold?

Main of our customers is from USA, CANADA. 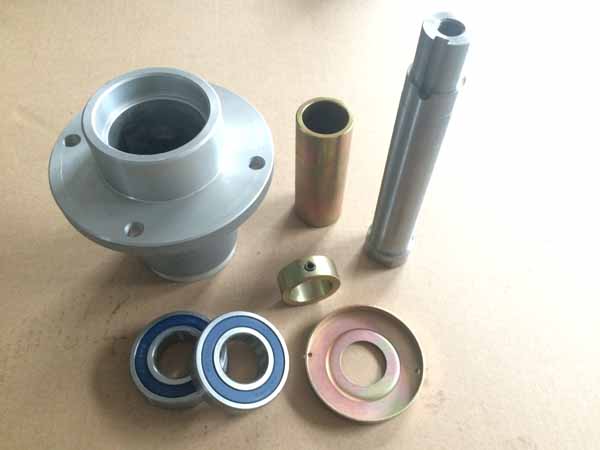 We have specialized in producing high precision mechanical parts more than 10years, got 6years experience on mower deck spindle assembly.

All of our cooperators are large mower companies or agricultural equipment companies, such as Badboy Mowers, Wood-Mizer, Caterpillar, etc.

Because of the long term cooperation, we could supply our customers not only the products but also our recommendation on the designs to saving costs.